This post is the write-up of a comparison between Terraform CDK and AWS CDK. Both of these Cloud Development Kits (CDK) are new approaches to writing infrastructure-as-code. They both provide libraries of infrastructure constructs in a variety of programming languages. Also included are command-line tools to deploy the infrastructure.

Like traditional Terraform the Terraform CDK supports multiple cloud providers. It also supports providers of other types of infrastructure (e.g. other CDN). Whereas AWS CDK is dedicated to managing AWS infrastructure.

This assessment focusses on managing AWS infrastructure ONLY.

What was being assessed?

Both of the CDKs were assessed against creating the same simple application in AWS. This was a AWS Lambda that read a message from a SQS queue and using data within sent a notification to a Slack channel. It also required a SQS as a Dead Letter Queue (DLQ) for repeated failed invocations. Additionally, the Lambda needed to read the Slack API credentials from AWS parameter store.

A summary of the architecture of the test application is in the diagram below. 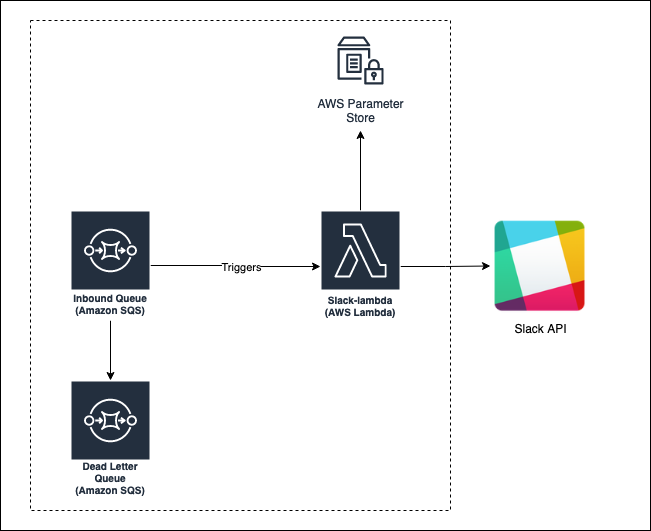 TypeScript was chosen as a language for both the Lambda and CDK infrastructure code. Jenkins, self-hosted in AWS, was used as a build and deployment server.

The initial set-up documentation made it easy to get started with the CDK. Unfortunately, the documentation deteriorated after this point. Context based help within the IDE pointed to the Terraform HCL documentation rather than anything based on the CDK. Furthermore, for some queries it was not possible to find answers in the community. This resulted in diving into the source code or applying guesswork.

The CDK still relies upon Terraform state files which need to saved to S3 as part of your stack updates. As a disclaimer, I’m not a fan on this system of tracking infrastructure state away from the source of truth. But a couple of times the state file became out of sync with the infrastructure in AWS. Although, this is no different from using the Terraform HCL and you may be happy to accept this risk.

2. Ease of integration into build and deployment pipeline

To be able to run the CDK in Jenkins it requires a few dependencies. As such, it was necessary to create a Docker container image (see below).

A few of these dependencies are organisation specific, but the important ones to note are:

Additionally, Jenkins required a AWS IAM policy for access to the infrastructure that it needed to update. This was then available to ALL jobs within Jenkins. Although it could have been more finely controlled by utilising IAM switch role.

Overall, it took a day to get Terraform CDK running on Jenkins. Which was hindered at times by the lack of documentation.

Terraform CDK has a concept of scope that’s passed into each of the constructors. The scope then becomes the current object (this). The LambdaFunction example below demonstrates this.

Modularisation just requires that the scope is passed into the programming construct (e.g. Class, Factory Method). This makes creating of independent modules straightforward. In this case, as TypeScript is being used, these could shared through a public or private NPM.

One challenge around modularisation is that the AWS provider NPM module is a single mono-module. As such, a module for SqsQueues still has to include everything AWS in it’s node_modules.

At the point of implementing the application there was no unit testing support. It was possible to test by calling cdktf synth in the shell and asserting on the resulting output. This was complex and very slow to run.

Thankfully, a recent update to Terraform CDK has introduced better support for unit testing. Although at the moment it appears limited to testing through Jest. As this is a new development, it is not possible to assess how usable this addition is.

The majority of properties on the CDK classes are strongly typed. A notable exception is that of policy documents. These require a string of the policy in JSON format. This leads to storing the policy in a file or performing an inline JSON.stringify() call (see below). Neither of which lends itself to readable code.

The String values with set values (e.g. Lambda runtime) are handled no differently from other String values. The CDK would have benefitted from using enum types to help improve readability and reduce mistakes.

At times writing the CDK code felt long-winded and similar to writing Terraform HCL. It would benefit from more abstraction of the AWS concepts. For example, a addPolicy() function on the IamRole class rather than creating a IamRolePolicyAttachment object with the arns of the Policy and Role.

Has dedicated language specific documentation which mades it very easy to get started and get building. Wider community is much bigger with more blog posts and opinions on implementing.

Each service supported by AWS CDK is installed as a separate NPM package (e.g. Aws Lambda). These each have their own documentation and independent versioning. However, during development occassional minor version incompatibility occurred. So it is advisable to keep these package versions aligned.

Underneath, AWS CDK is powered by Cloudformation which has two benefits. The first is that the change set is always compared with the source of truth (AWS). Second, changes can viewed through the Cloudformation console in AWS which can help diagnose problems.

2. Ease of integration into build and deployment pipeline

The AWS CDK NPM module contains everything required to run the AWS CDK CLI. It can be installed from the projects package.json. As such, there is no need for a dedicated docker container image for running in Jenkins.

Access to resources in AWS are controlled in one of two ways. First, like Terraform CDK a policy can be assigned to the role that is executing the AWS CDK command. Second, an independent role can be created for executing a particular stack. In this case the Jenkins role just needs access to cloudformation. The execution role arn is passed in via the CDK command line call (see below).

Getting AWS CDK running on Jenkins was straightforward and it was working in less than an hour.

Like Terraform CDK, the AWS CDK shares the concept of a scope that is passed from Construct to Construct.

AWS CDK encourages the use of extending cdk.Construct for your own code modules. This makes custom components consumed and interacted through the same mechanisms as those provided by AWS. Like Terraform CDK these modules could be easily shared via an NPM repository.

AWS CDK provides inbuilt assertions and snapshot testing capabilities. The assertion framework works by comparing against the yaml Cloudformation output. The ambiguity of the outputted cloudformation makes test driving the code difficult. This is especially difficult when there are references to other constructs by ARN. These are often rendered in a confusing manor (see deadLetterTargetArn below).

The Construct Objects in AWS CDK are all strongly typed. They also have enums and other types to help provide correct values. For example, a Function has a runtime property which is a type of Runtime. This Runtime type is an enum of accepted values (see below). As a result, the code is clear and there is a shorter feedback loop to discovering invalid values. This is due to not having to apply against AWS to discover a misspelling.

There are objects and types for most parts of an infrastructure definition. For example, a Policy is defined using PolicyStatement objects.

AWS CDK also has abstractions in place to create links between resources. Usually, linking a Lambda to SQS requires creation of an EventSourceMapping that references the two ARNS. In AWS CDK the same can be achieved by calling the addEventSource function on the LambdaFunction object.

Finally, as mentioned AWS CDK encourages any custom components to extend cdk.Construct. This results in a more unified look and feel of the codebase.

An advantage that Terraform CDK has is that it also supports other cloud and infrastructure providers. If your organisation has multiple cloud partners and a strong desire to use the same tooling then Terraform CDK is probably for you.

AWS CDK is the more mature and fully featured of the two CDKs. The high standard of documentation made it far easier to use. Writing code was cleaner and more concise. It was straightforward to get working on Jenkins and had more flexibility in choice of security models.

Both CDKs supported modularisation and distribution of packages via NPM. Though AWS CDK did encourage a more consistent approach to writing custom modules. Unit testing is also now supported in both of the CDKs.

Even if you work in an organisation that uses different cloud providers it may be worth considering using AWS CDK. The two CDKs are similar and it would not be too jarring to move between them (e.g. AWS CDK for AWS and Terraform CDK for Azure).

If you are writing infrastructure-as-code for AWS then the AWS CDK is currently the better of the two. But, if you are currently using Terraform HCL or Cloudformation you will find either of these CDKs a significant improvement.