What do you want your software release and deployment process to be like?

If you had no constraints from your organisation what would it look like?

There are two predominant factors around release and deployment:

Using these two factors we can make a axis for comparing different approaches to software release and deployment. 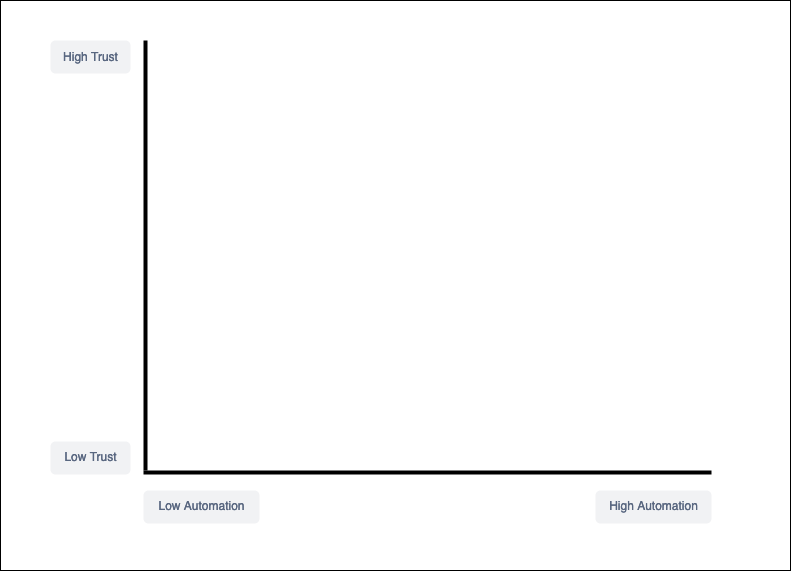 Looking at this axis can you pinpoint where your attitude to release and deployment lies? Do you have a preference towards more manual gates (lower trust)? And how much do you expect to happen without human intervention (automation level)?

Onto these axis I have placed well known techniques for release and deployment of software. 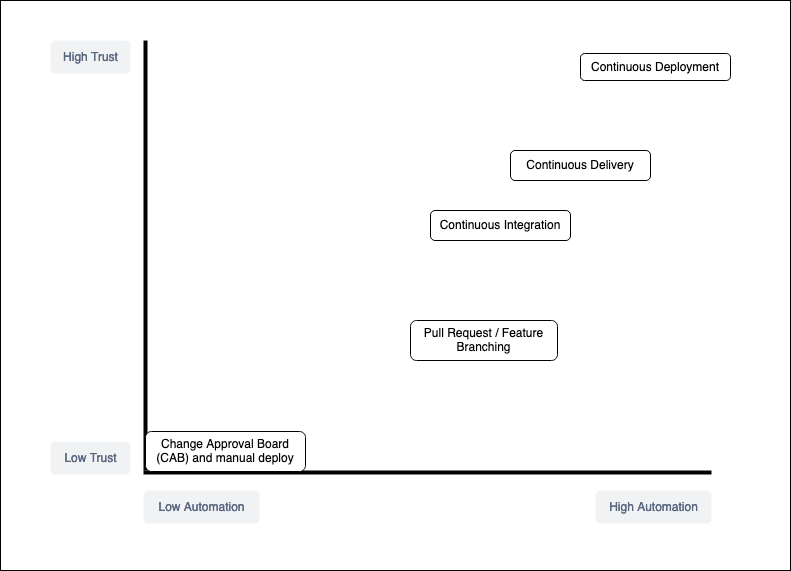 Let me explain by reasoning behind these placements….

In the bottom corner is a situation with CABs and little done to automate the deployment process. The need for approval is an indicator that there is an expectation that the team will break the product. Which demonstrates a low level of trust in the abilities and professionalism of the team.

The throttling of releases by this approval discourages the team from automating. Control of access to environments may even prevent the running of automation.

This is often a situation where there is more automation. For example, there is often a build server that runs when integration occurs. Trust appears higher within the organisation as auditable PR reduces need for wider approval. Yet, the enforced PR itself demonstrates a lower level of trust within the team itself. Which is exactly the intent of PRs.

In Open Source project you don’t know who is working on your project. Having an enforced review process might be a good idea, especially if you don’t want to spread Malware. The downside to this is a culture of lower trust. This can lead to dominant people becoming the arbiters of what is ‘good’ for the codebase. Furthermore, having system barriers that prevent pushing to mainline impacts trust. This result in lower empowerment and frustration (i.e. needing to create a branch and PR for a README change).

Martin Fowler’s post about CI is well worth a read as it clears up many misconceptions about CI. A common misconception is that you are doing CI if you have a build server.

Continually Integrating involves the team regularly pushing/merging code to mainline. Thus, it is essential to have automation around build and running of tests. Furthermore, it also demonstrates a higher level of trust within the team. As they are trusting that any agreed practices (e.g. peer review, standards) are happening.

Yet, there is not absolute trust as gates remain to testing and/or production. This could originate from the organisation, team or a combination of both. These gates also make it unlikely that the team will pursue further automation. Such as full deployment pipelines, security scans and in-live testing. It is also feasible that the deployment to other environments could still be manual.

CD is the ability to release to production at anytime. An interesting facet of this is that mainline has to constantly be in a releasable state. This requires higher trust within the team and organisation. As both would need reassuring that releases will not cause impact to customers. Furthermore, the move to CD will also increase the level of automation. This could include: full deployment pipelines, security scanning and monitoring of production environment.

In the top corner in the zone of high trust and automation is CDP. Every code push/merge to mainline is deployed automatically to production. Reaching this point requires a high level of organisation and team trust. There is no gate to deployment and engineers are trusted to avoid customer outages.

Accompanying this is an automate everything approach to software release and deployment. Which may include in-live testing, service observability and automatic rollbacks when deployments fail.

The approach to software release and deployment is as much as about trust as it is about automation. The level of trust can be determined at both the organisation and team level. As it is possible to have an organisation with absolute trust but a team who feel they need to impose gates.